Auckland Council’s Agapanthus Working Group met in May and it was good to see solid progress being made in breeding, trials and other work to develop and ultimately market “environmental friendly” agapanthus.  Interestingly the science is stacking up behind the Council’s current regional controls allowing dwarf forms.  That said, there are also several medium-sized varieties that look promising.  “Tall” varieties are proving more challenging.

This programme will establish protocols for environmentally acceptable agapanthus and thus take the heat out of the “friend or foe” debate, at least for many people and some varieties.  The project is particularly relevant for those that supply the Auckland markets and our work within the NPPA framework.

Low environmental impact varieties will be endorsed for sale by NGINZ and Auckland Council.  The Ecopanthus Working Group met in September.  It comprises Auckland Council Biosecurity, Auckland Regional Gardens, Landcare and NGINZ.  The group reviewed trials over the past two summers and several varieties that meet the developing criteria are obvious; others are still under test.  Trails will continue this summer; if you’ve got a variety you’d like to see under test, let Frances Palmer know please.

Agapanthus - friend or foe?  No easy question.  No other plant brought such a wide range of feedback during the NPPA process in 2011/12.  Many favoured it being added to the “NPPA banned list”, others argued against its inclusion.  The latter group “won the day”.  In Auckland, tall growing varieties are banned, while short growing ones are allowed.

Some nurseries and breeders have reacted to environmental concerns and pressure by selecting cultivars of low fertility and promoted them as “Auckland-safe”, “environmentally friendly” and the like.  While laudable, one day they may be asked to substantiate such claims!

NGINZ recently met with Landcare, Auckland Council and the Auckland Botanic Gardens discussing criteria to classify “environmentally-friendly agapanthus” and to develop protocols for assessment of the same.  The result is a programme that establishes procedures to screen and market varieties that meet defined fertility criteria.  It:

An NGINZ initiative and administered programme complete with license fees for use of the brand.

As part of a trial to assess named cultivars of Agapanthus for their capacity to produce seed, we are looking for candidate varieties. If you would like a particular cultivar to go into the trial being carried out in association with the Auckland Regional Council and the Auckland Botanic Gardens then please contact us.  We need a minimum of 3 mature plants (ones that will flower this season) for any cultivar offered for this pre-screening trial.

The purpose of the trial is to look at a wide range of types to get an indication of how much or how little seed they each set when planted in the garden amongst a range of other cultivars of Agapanthus.

Those types that look to set no or a minimal amount of viable seed may then be nominated to go to a further screening process carried out by Landcare scientists. This more scientific study will aim to exactly quantify how much viable seed is set. If the fertility of a variety falls below the thresholds then it qualifies to be identified as environmentally-friendly.

Such cultivars will be permitted to be grown and sold in those regions that currently restrict the planting of Agapanthus due to their weediness and potential to spread.
This programme is an attempt for our industry to be proactive and work with the authorities to offer cultivars of agapanthus which benefit both the industry and the community. 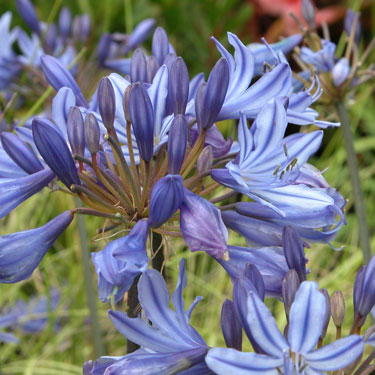