A pilot for the Plant Production Biosecurity Scheme (PPBS) has been underway in 20 nurseries around the country since February and the benefits of the scheme are fast becoming apparent, says PPBS project lead John Liddle.

The PPBS is a systematic approach to biosecurity risk management. The scheme’s systems and supporting documentation, enables plant producers to identify, control, manage or avoid biosecurity hazards in their nursery and production processes.

“The resulting biosecurity outcomes protect not just plant producers but also their customers, the environment and the New Zealand economy as a whole,” says John

For some of the nurseries involved in the pilot, the process towards getting certified has been relatively straight forward as they already had biosecurity systems, infrastructure and documentation in place. But for others the process has been a longer journey, requiring systems changes and new infrastructure.

“We recognise that the process will be easier for some nurseries than others and want to emphasise that gaining certification is not a race. We provide support and advice to nurseries as they go through the required steps. Feedback from those in the pilot is in turn helping us improve the process and experience for other nurseries.”

Several of the pilot nurseries share their thoughts on the PPBS:

Scott Base Nurseries has been a propagation nursery in Whenuapai since 1989. It is a family run business, owned and operated by siblings Kathryn and Michael Scott, and supplies the landscape and wholesale nursery market. It has 8-10 employees.

Scott Base is one of several pilot participants now certification-ready after getting all audit issues signed off by AsureQuality.

Kathryn Scott said it was pretty exciting being certification-ready as introducing the scheme was a steep learning curve for everyone at the nursery. Some of the staff have been there for 15 years and were not so agreeable to change.

'However, they are seeing the benefits now. A lot of the hygiene protocols we have introduced means we have less issues and problems with plants."

"Customers are also impressed with what we've been doing, as they see the signs coming up the driveway."

Kathryn said Scott Base Nurseries took part in the pilot scheme for a number of reasons:

The new processes that Scott Base implemented under the pilot were:

In the longer term, she does anticipate that the scheme will add value and give Scott Base a competitive advantage in the marketplace. Especially as Kauri dieback raises awareness of the importance of good biosecurity.

“I believe customers will want more assurance once biosecurity becomes more of an expected level of normality."

Overall Kathryn said the pilot was a beneficial process and she would recommend it to other nurseries.

“We knew the importance of plant hygiene, and the programme identified areas for improvement, and as a result have healthy plants, for this reason I would suggest it to people. It’s a great scheme.”

Ardmore Nurseries is a wholesale plant nursery near Clevedon, Auckland. It operates on over 14 hectares and employs 28 staff. It has over 1000 varieties of plants and trees including New Zealand natives and popular exotic garden plants. Customers are mainly landscapers (80%) and retailers. They can self-select plants by driving around the nursery. Ardmore also delivers plants nationwide.

Ardmore Nurseries systems manager Kara Beaumont said the nursery got involved in the PPBS pilot because the team wanted to be involved early, to understand what was involved in the scheme, and to offer feedback in the testing phase.

Kara said 80% of changes made as a result of the PBBS were record keeping for example:

The changes Ardmore made under the pilot were:

Kara said the benefits of the scheme were around social responsibility and risk management. “If we were disregard biosecurity then there could be a very detrimental effect on the environment, the economy and our reputation.”

Kara said she would absolutely recommend that other nurseries go through the scheme.

“Plant producers should help one another on this because it’s the right thing to do. I don’t think the scheme will give accredited nurseries a competitive advantage, we should support one another in this to strengthen our industry and to protect the broader environment and economy.”

Ngāti Whātua Orākei runs the Okāhu Rakau Nursery, which has three staff members. The community nursery grows plants that aim to increase the biodiversity of birdlife, plants, insects and iwi habitats. The Iwi maintains its native bushland and other landscape projects with plants supplied by the nursery. The nursery, which uses no chemicals to grow its plants and manage pests, is in an isolated area and visitors only come by appointment.

Merania Kerehoma of Ngāti Whātua Orākei said the nursery agreed to take part in the pilot scheme for a number of reasons:

Being a non-chemical nursery, Okāhu Rakau had to use for the first time copper to address the myrtle rust risk. The nursery team also identified lack of signage as being a potential biosecurity risk.

Merania said while implementing the PPBS practices and using the guidelines on a regular basis would be a challenge, “I believe it will make a huge improvement on organising our nursery, hygiene and maybe quality of products.”

She said customers were already asking nursery staff about the biosecurity measures taken so there was increased awareness of the risks.

“It would be great if more nurseries joined (the PPBS) as the biggest kaupapa for us is not just the business but to reduce risk to the environment.”

The Treeline Native Nursery is based in Kaharoa, Rotorua and specialises in growing bulk quantities for revegetation and restoration projects, landscaping and farm plantings. It supplies local authorities, the Department of Conservation, subdivision projects, private landscaping, farm planting, community and landcare projects.
Treeline has recently become certification-ready and staff member Debbie Porter, who did most of the Plant Producers Biosecurity Scheme work, said customers were extremely positive about the new biosecurity processes.

“They have full confidence in our products and are really happy with what we are giving them. Our staff are now talking to customers about biosecurity – it’s not just coming from management.”

Through the PPBS process, Treeline identified a potential biohazard in the fact the nursery didn’t have an isolation area so incoming plants and stock were not thoroughly checked before being introduced into the nursery.  Since establishing an isolation area, Treeline has noted incoming pest issues on plants arriving from other nurseries.

“We recently had one tray of plants with mites. If we used our old system, those plants would have been in our nursery – with the mites spreading – before we discovered them.”

Treeline has also implemented other new processes such as:

Debbie said the new systems were now consistent across aspects of the nursery operation and had become habits.

She said PPBS certification would add value to Treeline and give it a competitive advantage.

“Biosecurity is such an important part of protection for the nursery sector, and future proofing.  A biosecurity scheme will instil confidence, within the nursery sector and nationally, that appropriate monitoring, precautions, procedures and actions are being taken. This will in turn produce a high quality, disease and pest free plants for introduction into the environment. I think it will give us a competitive advantage, as I see regional councils and people in general acknowledging the benefits of suppliers who follow the standards and achieve certification.”

Debbie recommended that all nurseries undertake the scheme and said it ought to become a compulsory requirement to be able to sell plants in the future.  She said with the pressure on the industry due to the one billion tree programme, it was crucial that no short cuts were taken over biosecurity.

"It would be great if more nurseries joined (the PPBS) as the biggest kaupapa for us is not just the business but to reduce risk to the environment" (Merania Kerehoma of Ngāti Whātua Orākei) ... more 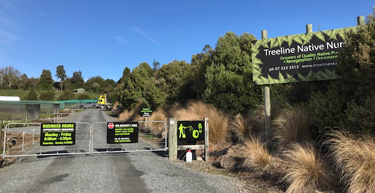 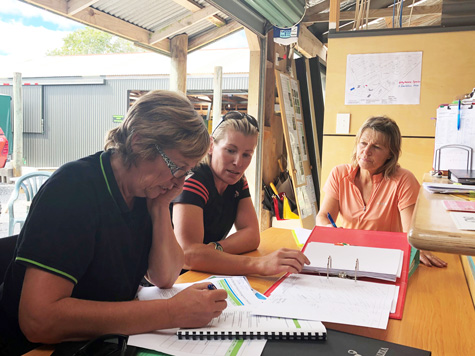 Working through the audit at Treeline Native Nursery - Diane of Asure Quality (left), and Debbie and Diane from Treeline 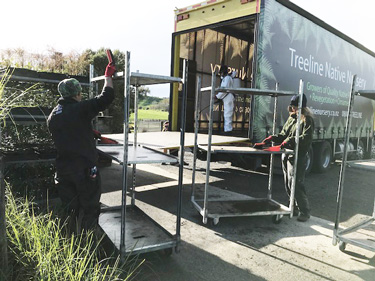 Trolley and truck clean down at Treeline Native Nursery