Today, 28 June 2017, the Ministry for Primary Industries introduced legal restrictions on the movement of myrtle species plants and green waste out of the Taranaki region.

The restrictions are set out in a Controlled Area Notice. Full information about the Controlled Area, including the notice itself and a map, are at www.mpi.govt.nz/myrtlerust.

The controls are an attempt to contain the disease and to help control any spread of myrtle rust from the most infected area around Waitara. We need to take this action now as during winter symptoms are suppressed and we cannot as yet get a full picture of where the disease is present. Come spring, we may still have a chance to eradicate so we need to keep our options open by appropriately controlling outbreaks.

The Controlled Area extends 10km out from the known infected properties. (A Controlled Area is an area where movement of risk goods is restricted in order to prevent the spread of biosecurity threats.)

As of 28 June it is illegal to move any plants or trees belonging to the myrtle family and any garden waste, fruit or prunings from those plants out of this area, until further notice. Note, fruit only includes feijoa and guava which have largely finished fruiting.

The controls are an important tool to help control the spread of the myrtle rust fungus and protect both iconic native trees and commercially grown plants and MPI needs your help to make sure myrtle rust doesn’t spread.

It is important to keep letting us know if you think you’ve seen the signs of myrtle rust - whether it’s in the Controlled Area or not.

FAQs
Where is the Controlled Area?
The Controlled Area extends 10km from the known locations of myrtle rust infection in the Waitara area of Taranaki. Signs have been put in place on the roads leading in and out of the area, and maps are available on the MPI website: www.mpi.govt.nz
You can enter your address into an interactive map and you will see if your property or business is within the Controlled Area.

Why has this been put in place?
There are currently more than 50 properties in Taranaki affected by the myrtle rust fungus. Putting restrictions on moving myrtle plants and material out of the area where the rust has been found will help prevent the fungus spreading to other parts of the country. It will also allow us to get rid of myrtle rust in the places where it has been found.

How do I know if a plant is a myrtle or not?
A full list of myrtle species plants is available on the MPI website: http://www.mpi.govt.nz/document-vault/18118. If you’re still unsure, the safest option is to not move any plants out of the Controlled Area.

Can I move myrtle plants out of the Controlled Area if they don’t have myrtle rust?
No, the Controlled Area applies to all myrtle species plants – whether they appear healthy or not. Plants can be infected with the rust without showing symptoms, so a restriction on all myrtles is the only way of ensuring it doesn’t spread.

Am I allowed to take myrtle plants into the Controlled Area?
Yes, the restrictions only apply to taking plants out of the Controlled Area. Note that this does mean that once myrtle species plants are brought into the area they can’t be taken out again.

Can I plant myrtle plants in the Controlled Area?
Yes, myrtle species plants that have been brought into the area or purchased inside the area can be planted as normal.

What about fruit, garden waste or plant products? Can I take this out of the Controlled Area?
You cannot take clippings, pruning waste etc from myrtle species outside the Controlled Area. Small amounts of garden waste can be disposed of as usual in the Waitara or New Plymouth transfer stations. Larger loads of tree waste (e.g. from arborist operations) should go to the New Plymouth transfer station.

How will you enforce the Controlled Area?
Signs will be posted on roads in and out of the restricted area to make it clear where it begins and ends. We are also advertising through local newspapers and radio as well as social media.
While it is an offence to knowingly breach the conditions set of a Controlled Area, ultimately we’re asking for the public’s support and cooperation in helping to stop the spread of myrtle rust. This fungus poses a serious risk to some of our most iconic native plants as well as commercially grown species like feijoas. With your help we can halt the spread of myrtle rust and eradicate it where it has already been found.

Aren’t you wasting everyone’s time doing this? The disease has already bolted hasn’t it?
We don’t know that’s the case just yet. During the cold winter months, myrtle rust symptoms are suppressed and we still don’t know exactly where the disease is present and the scale of the outbreak.
We could be dealing with an extensive outbreak, but there remains some possibility we may only have a small level of infection that could ultimately be eradicated.
So until the weather warms up and any infection present becomes much more visible, we need to do everything possible to contain and destroy it in the areas we know about.
Come spring, if we find it is limited to the current known areas, we’ll have the best possible chance to get rid of it from New Zealand. If it turns out to be widespread, we know we have done everything possible to protect New Zealand.

Excerpt from the press release:
As the Ministry for Primary Industries (MPI) and the Department of Conservation (DOC) are stepping up the fight against myrtle rust, MPI’s Myrtle Rust Response Incident Controller David Yard says the public has provided huge support to the response to date, with many reports of suspicious symptoms coming through the Ministry’s 0800 number“(0800 80 99 66).

“We encourage people to keep looking out for signs of myrtle rust and telling us about it. Knowing where the disease is and treating it gives us the best chance of protecting some of our treasured plants into the future. We could be dealing with an extensive outbreak, but there remains some possibility we may only have a small level of infection that could ultimately be eradicated. Until the weather warms up and any infection present becomes much more visible, we need to do everything possible to contain and destroy it in the areas we know about. Come spring, if we find it is limited to the current known areas, we’ll have the best possible chance to get rid of it from New Zealand,” Mr Yard says.

The rust has also been found on a small number of properties in Te Puke in the Bay of Plenty and work is still underway to determine the scale of the situation there.
There are no restrictions on plant movements or planting in other areas of New Zealand.

“We encourage Taranaki residents to support us in this important job by not moving myrtle species plants or myrtle green waste out of the specified Controlled Area. Garden waste should be disposed of responsibly within the Controlled Area – for example at the Waitara transfer station or the New Plymouth landfill. Myrtle family plants can still be bought and planted within the zone.” 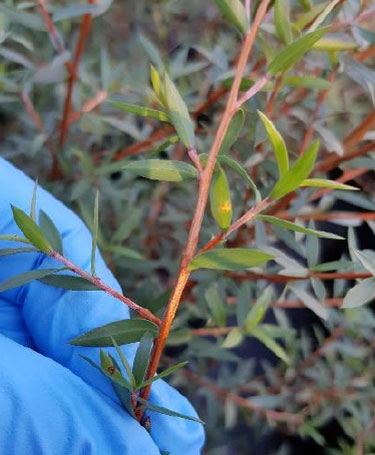