Biosecurity champions were recognised in Wellington on Wednesday night with the announcement of the 2017 New Zealand Biosecurity Award recipients.

We’re delighted that NZPPI was a recipient of the Highly Commended award in the Industry category, which recognises industry groups or organisations that have demonstrated a significant contribution to improving New Zealand’s biosecurity integrity.

In being nominated, NZPPI’s influence and unified approach to the biosecurity system was highlighted, as was our proactiveness in preparing our membership and wider horticultural industry partners for the arrival of unwanted pests and diseases, like myrtle rust.

"This resulted in plants infected with myrtle rust being observed within nurseries, and reported, quickly – a critical step in any biosecurity response", says NZPPI Board Chair Andrew Harrison.

“As well as NZPPI, this award recognises the active role our industry members have played, and continue to play, in tackling myrtle rust.
From Tom and Julia at Kerikeri Plant Production’s first report to the Ministry for Primary Industries, through to the many other plant producers and industry partners who have since detected and reported the disease on their properties, we knew that as an industry and sector we were doing the right thing for New Zealand.

The Minister for Primary Industries said in his announcement that the awards honour biosecurity heroes and that’s what our members have proven to be.”

Another key focus of the NZPPI award nomination was the development of Risk Management Protocols for myrtle rust which were put together at the outset of the response to ensure the biosecurity risk of plant production businesses becoming infected or distributing myrtle rust was, and is, managed in line with the best technical knowledge and advice available.

Malcolm Woolmore of Lyndale Liners says this is an example of how the organisation adds value to the industry and members. “The development and implementation of the protocols – which have been hugely supported by members – demonstrate our ability to provide invaluable leadership and services to our members that gives them practical advice in the short-term and longer-term certainty about how to effectively manage any biosecurity risk associated with our industry.”

All in all, the awards initiative celebrates the efforts of people who are doing their bit for biosecurity every day and reflects a key theme of the Biosecurity 2025 Direction Statement of a ‘biosecurity team of 4.7 million’ – something NZPPI and its members fully support.

"We’ve worked hard in the biosecurity space to ensure a strong and united voice for plant producers, and it’s great that our efforts - and those of the many members who have worked with us over the years - have been recognised with this award. It’s been a team effort and we thank you." 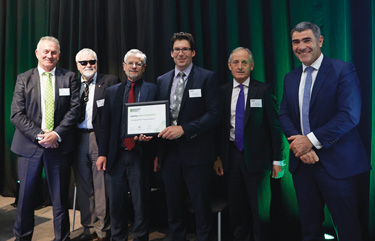